The fruitweb forecast model for the apple sawfly is a complex model for simulating the population development of this important insect pest in apple cultivation. The following statements can be made with the model: 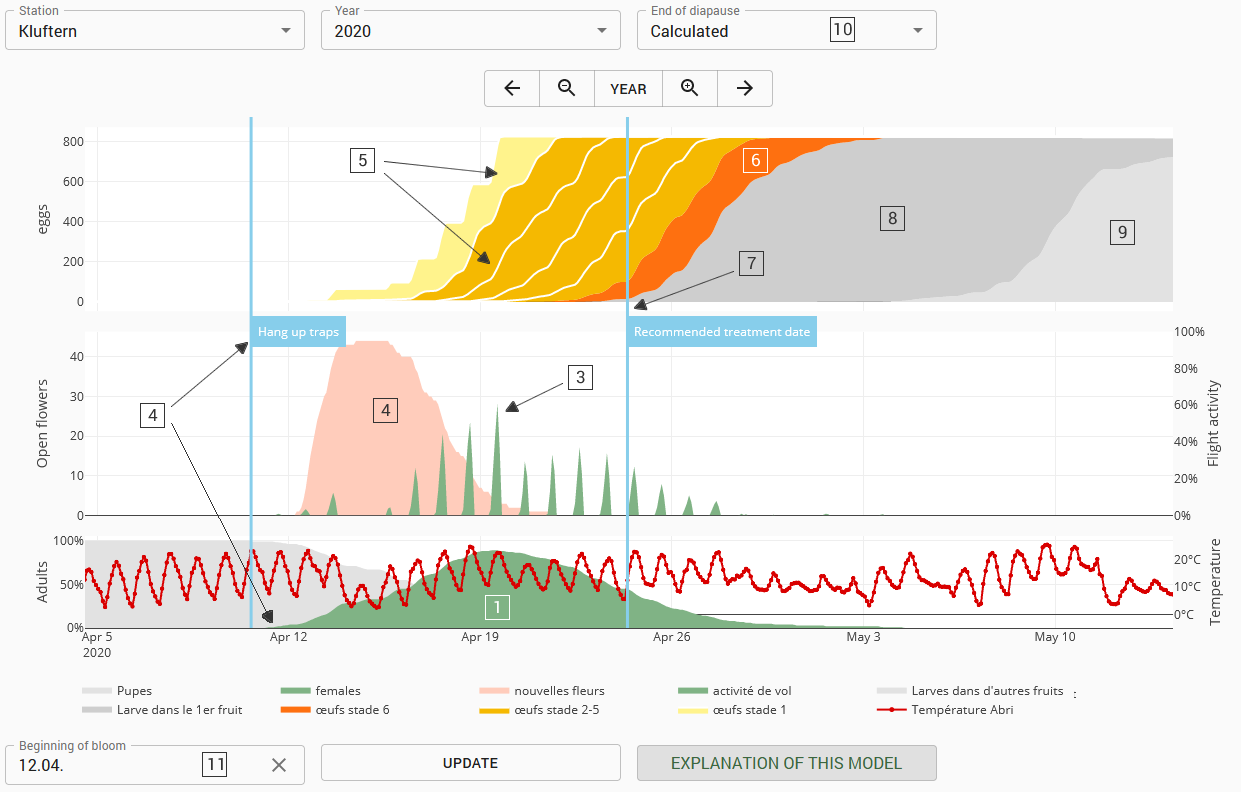 End of the diapause

The apple sawfly overwinters in a prepupal stage in the ground. At this stage, also called diapause, there is no development. About 3 to 4 weeks before the adult animals hatch, the diapause ends and the animals develop from the pupa into winged animals. For the calculation of the hatching date of the adults, the end of the diapause must be determined. There are three setting options for this [10]:

The end of the diapause and the hatching of the adults are shown in the lower line. Shortly before the start of the flight, the hanging of the whiteboards is indicated by a vertical line [4].

Flight activity of the adult animals

Adult saw wasps only fly at a temperature of around 11° C and only during the day. Their flight activity is highest on sunny, windless days [3]. For the simulation of the flight activity and thus also the egg-laying by the females, only the temperature is used at the moment. However, it is planned to take the wind speed and the sunshine intensity into account in the future.

The adult females lay their eggs exclusively in the base of freshly opened flowers (royal blossoms on perennial fruit wood are preferred). For this reason it is very important to indicate the exact start of flowering [11]. The course of the freshly opened flowers is then displayed in the middle graphic [4]. In the upper graphic, the freshly laid eggs, the ice stages 2 to 5 [5] and the critical „roach“ stage [6] are displayed. It is not the number of open flowers that is responsible for the intensity of the oviposition, but only the intensity of flight activity. It is therefore assumed that as soon as flowers are opened, their absolute number does not limit the oviposition.

Larvae hatch and onset of diapause

Forecast of the treatment date

In organic fruit growing, Quassia is treated shortly before the larvae hatch, depending on the approval situation. In the forecast model, this date is determined when 2% of the larvae have hatched. This is indicated by a vertical line [7]. Depending on the weather, the larvae hatch may take longer, so that further treatment may be necessary. However, the model does NOT address this fact.

TRAPMAN M.C.,2016a.-The development of a dynamic simulation model for the biology of the apple sawfly (Hoplocampa testudinea), and the implementation as decision support system, pp. 60-68.In: Proceedings of the 17thinternational conference on organic fruit-growing, February 15-17, University of Hohenheim, Stuttgart, Germany.